The Hidden Costs of Delivering Pizza

From Wayfair to Google, employees have recently organized workplace walkouts to call for changes at their companies — building on the long tradition of strikes and work stoppages.

Deemed “one of the most dangerous jobs in America” by a VICE News article, food and pizza delivery drivers face a number of issues that often go under-reported. A recent Coworker.org survey of over 50 self-identified pizza or food delivery drivers sheds light on how vehicle wear and tear, inclement weather, and “tipping culture” impact the everyday lives of delivery workers. 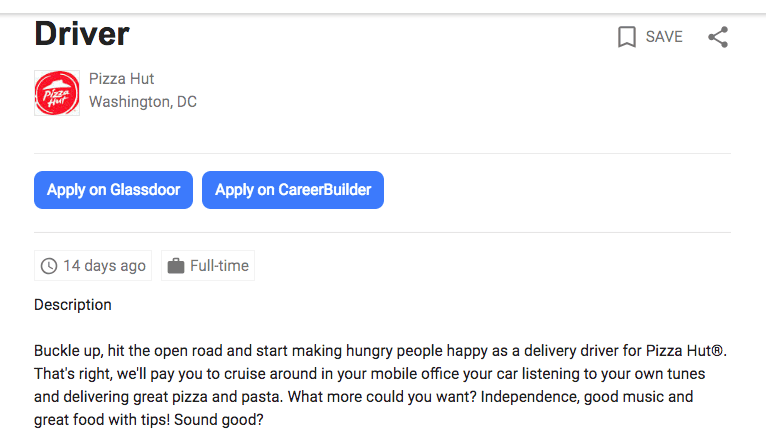 The vast majority of responders (77%) cited damage or wear-and-tear to their vehicles as one of the main problems they have faced on the job, according to the Coworker.org survey conducted during the end of October through mid-November 2018. Drivers say that the damage working in food delivery inflicts on their vehicles cuts significantly into their paychecks.

Drivers told us that companies aren’t doing enough to offset the high costs of vehicle maintenance. According to a pizza delivery driver from Ohio, drivers can average “around 80–120 miles on your car per night. You run your vehicle into the ground. Wear and tear on tires, oil changes, and any other damage to your work vehicle are completely on you as an individual with no assistance from the company”.

Some drivers said that they would like some help from the companies for which they deliver when it comes to car repair. Some said they would prefer the company to “provide the car”, while others think that their employers should “pay for a percentage of the of the repairs”.

In addition, 61% of the self-identified food delivery drivers indicated that they have experienced issues with tipping and pay. In the survey, a few drivers expressed frustration with the difference in hourly wages when working in store versus when doing a delivery. One driver notes, “whenever a driver takes a delivery, their pay rate goes down significantly. I make around $8.25 per hour when I’m in the store, but after I check the delivery out, my pay goes down to $4.25.”

Companies often say that the tips drivers receive make up for the lower wage, but survey respondents told us that tips are an unreliable source of income. One driver reveals, “I was told tips are supposed to offset, but that relies on the kindness of other people. [Often,] they ether tip a little bit or not at all.” Other times, drivers say that customers confuse the company delivery fee with a tip. A Domino’s pizza delivery driver asserts, “Delivery fees are used by the company to give the impression of lower pricing, [but] then when the quoted cost of service is several dollars high than expected, customers […] often assume [the fee] is a tip for the driver based on the wording.” Delivery drivers can find themselves in dangerous road conditions.

Drivers say that poor road conditions can also negatively impact a driver’s safety and take home pay. According to the survey, 64% of respondents said that delays and traffic were a major problem that they faced on the job. Of those respondents, some drivers report that they have had to work through severe weather conditions. One driver said, “I’ve been in multiple accidents that weren’t my fault on the road due to heavy traffic and ice/snow.” Another driver said that the job required them to be out driving “sleet, rain, or shine”. He recounts, “Not too long ago, there was tropical storm that rolled through. It rained so hard at one point that the road could not be seen. Other vehicles could not be seen even with the high beams, but delivers did not stop or slow during that time.”

Another 13% of self-identified delivery drivers said that they have also experienced issues with parking. Especially in urban areas, parking can be a big challenge for drivers. “UberEats partners with lots of restaurants in downtown areas where only paid parking is available, and they do not reimburse for parking,” explains one driver. She continues, “if you cancel a request right after accepting because you want to avoid a dangerous area or not have to pay for parking, you get penalized for the cancellation.” She wants companies like Uber to “reimburse [drivers] for circumstantial inconveniences like parking fees and detour miles”. Job description for UberEATS drivers, the food delivery wing of the rideshare company.

News outlets frequently report instances of food and pizza delivery drivers getting robbed on the job¹. 22% of self-identified pizza and food delivery workers surveyed said robbery and theft was a main problem that they have faced. “I have been robbed multiple times but I’ve never been hurt. I have seen multiple drivers get hurt. Some really badly,” reports a Domino’s delivery driver.

In particular, some women delivery drivers say that they feel singled out for their gender. One describes, “Delivery driving is very misunderstood. People think it’s easy but it’s very difficult and dangerous. I’m a petite female and often feel like a target. I have spent most of my time as a driver (6 years) in a very bad area.” She says that companies can better help protect drivers by providing more “training, educating people/public, [and] not using car toppers or uniforms [while delivering]”.

Finally, some drivers report experiencing harassment while delivering food. In the survey, one driver recounts, “I had an experience with a naked woman and a man doing sexual things right in front of me when I had entered their garage…. I still remember exactly what they were wearing.” Experiences of harassment often violate employee dignity and have a negative impact on work performance.

Have you experienced any of these issues at your workplace? What ideas do you have to improve your job? Contact [email protected] with your thoughts and suggestions. Workers at Domino’s, Papa John’s, Uber, and other food delivery companies have started campaigns on Coworker.org to be the change they want to see in their workplaces.