“This surcharge is an insult”: What Uber and Lyft Drivers are Saying about Rising Gas Prices and Companies’ Paltry Plans for Relief 90% of drivers surveyed said Uber and Lyft's per-trip fuel surcharge "is not sufficient to help with gas prices.”

As gas prices surged to record highs in just a few weeks’ time, app-based drivers are struggling to cover the costs. In response, nearly 10,000 people signed a petition on Coworker.org, calling on both Uber and Lyft to help drivers deal with high gas prices.

On March 11, Uber announced it would add a new “fuel surcharge” of $0.35-$0.55 to each trip or delivery in order “to help reduce the burden” that gas prices are putting on the company’s workers. According to the company, the surcharge will be paid by customers “with 100% of that money going directly to workers’ pockets” beginning on March 16, 2022. Days later, Lyft announced it would be “adding a $0.55 fuel surcharge to each ride that’ll go directly from riders to drivers.” Similar policies have since been announced by Grubhub and Doordash.

Between March 15 and 16, 2022, Coworker.org surveyed 217 self-identified platform-based drivers from 29 states and Washington, DC about their response to the announcements from Uber and Lyft.

In response to the question “What do you think of Uber's new gas price surcharge policy?” 90% of drivers surveyed said “this is not sufficient to help with gas prices” while 10% said the policies were sufficient. 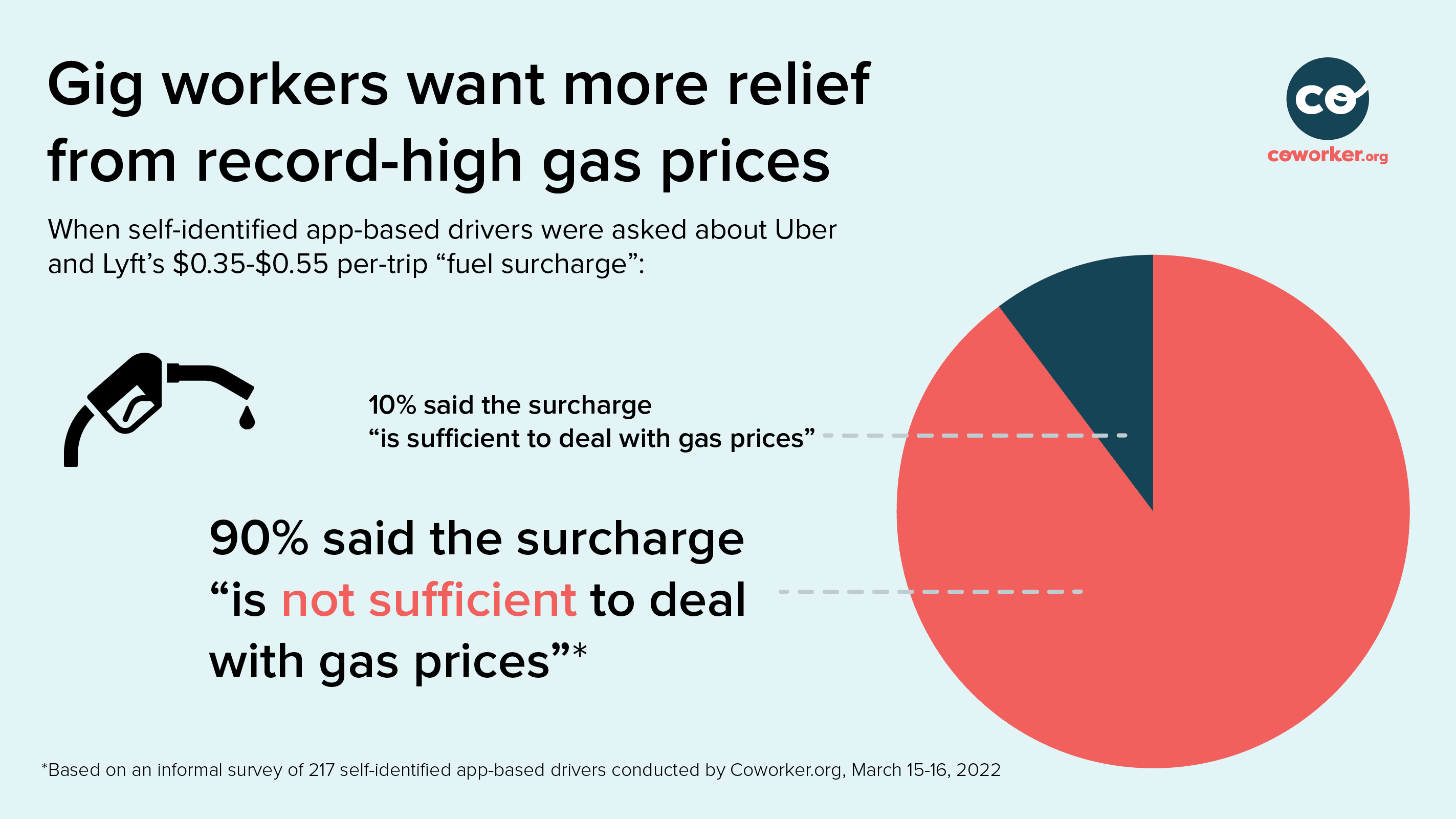 We asked the respondents to tell us more about how they are dealing with high gas prices, and how they would like Uber and Lyft to help. Here’s what they said:

Many drivers feel the surcharge amount is too small, and doesn’t help with longer rides.

The majority of respondents were disappointed by the per-trip surcharge, and instead suggested the charge should be calculated based on mileage. Many noted that under this policy, they won’t be able to afford to take longer rides.

“With this little of a surcharge, I will have to do over 16 trips just for one gallon of gas.” - Rachel

“More trip pickups are getting farther away, so .55 doesn't really mean much. Better to make the fee relative to the distance to pick up AND add the .55 as a rider [surcharge].” - Ed, FL

“It needs to be based on MILEAGE driven, not just per trip. A trip could be 1 mile or 11 miles which would create a mega difference in gas cost. This minimal add-on only encourages me to take the shortest trips available and reject all longer trips.” - Daniel, FL

Drivers say they are spending a lot of time and gas getting to passenger pickup locations - time which is uncompensated and not factored into a per-trip surcharge.

Many drivers note that Uber and Lyft only pay drivers when passengers are in their vehicles and say that time spent driving to pick up a passenger, or driving while waiting for a request should be compensated and factored into a mileage based surcharge.

“This does little to help balance the cost of driving and filling up for gas. At times I drive for over 30 minutes before I get a request and this happens way too often.” - Erick, VA

“Both Uber and Lyft need to pay us from the time we accept the ride and drop them off, not just when they are in our vehicle. I get called to rides that are 20 to 30 miles away for pick up and I don't get paid for that.” - Christine

“First and foremost, we have been trying to get higher wages per trip even before the gas prices went up. Now to insult us with this minimal amount is ridiculous.” Judy, CA

“Uber hasn't raised driver base rates in my market ever. Only decreased them. They need to increase base rates overall, but they really should increase the per mile rate by $0.15 for the driver and pickup base fee by an additional $0.50 for the driver.” - Chris, IL

Tips are few and far between, and drivers fear additional fees passed on to customers will further discourage them from tipping.

“While I appreciate the efforts, it’s still not enough. Orders are continuing to decrease, most bordering on ridiculous… Either raise the surcharge or cut back the delivery fee to encourage more tips. Customers think WE get that money!” - Brandy, VA

“They should raise the mileage pay. Why should the customer pay extra? They didn’t ask for the gas to go up. As a multibillion dollar company we know it’s not your fault either, but out of kindness this should be coming out your pocket… Not to mention 95% Of the time I don’t get tipped.” - Crystal, GA

Through the comments they've shared with Coworker.org, many drivers have expressed the feeling that they have sacrificed for Uber and Lyft from working on the frontlines through a global pandemic to sticking with these companies through driver shortages and adapting to constant fluctuations in pay.  With gas at record highs, $0.35-$0.55 per trip feels, as Sergio, a driver from New York put it, “like a slap in the face.”

Want to create your own petition to improve a work issue? Get started here.